My little part of my villages history ( Hopefully )

Back in early 2016 after been asked to repaint and restore the original South Moor No.2 lodge banner that is now on display in the local primary school Greenland Community primary. I was approached by the members of a group who had formed on the premise of creating a new banner to be taken to the 2017 Durham Miners Gala. 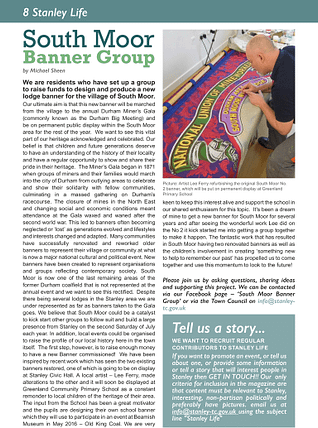 As a life long resident and a South Moor lad been offered the chance to help in the creation of a new banner for my village was a great honor. Working along side local residents and members of county and town councils in the banner group to come up with a new and unique design based on there brief as well as recreating one of the original images that on the South Moor No2 banner was a great experience, delving in to the archives of local mining history, visiting heritage days where original banners from all over the north east were displayed and researching the history of the banners and how they were made to enable me to do such a great cause justice.

The Banner was paid for with funding from both county and local town councillors, but without the original idea from Michale Sheen and the rest of the guys in South Moor banner group and the skills and advice from all the gang at AA Flags this would never have happened.

See You At the Gala